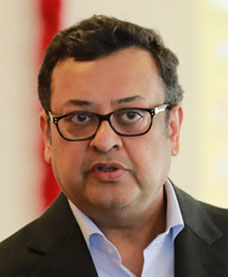 Nitish Jain is an educationist, philanthropist, entrepreneur, technology enthusiast and President of Australian-accredited business school S P Jain School of Global Management. With state-of-the-art campuses in Dubai, Mumbai, Singapore and Sydney, S P Jain has established a strong foothold for itself in the Asia Pacific.

In the last fifteen years as President of the School, Nitish has spearheaded a visionary goal – to create a school that is recognised all over the world for its innovative and disruptive style of education. Under Nitish’s leadership, S P Jain is credited with several pioneering initiatives and has set several benchmarks in global business education, including a multi-city learning model that has seen its students travel to no less than 3 countries as part of their undergraduate / postgraduate education. The result of this is the transformation of business managers into global leaders who are adaptable, multicultural and globally relevant to companies of the 21st century.

Their success at work and contributions in the business community have led to S P Jain’s growth as a top-ranked global business school as rated by:

In recognition of these and his other achievements in the field of global business education, Nitish was felicitated with the Outstanding Contribution to Education Award by the CMO Asia. His efforts to reimagine business education and offer innovative programs were recognised through the Entrepreneur of the Year Award by TIMES NOW (2014) and Award for Business Excellence by the Australia India Business Council (2014).

In 2013, he held a coveted spot in Forbes’ list of UAE’s 75 most influential people. In recognition of his work in cementing Indo-Australia ties through education, Nitish was hand-picked by the Indian Prime Minister Narendra Modi to join his official CEO delegation, comprising India’s top 12 CEOs, to Australia post the G20 summit.

Nitish is a keen technology enthusiast, looking for imaginative ways to integrate his passion for technology with traditional teaching methods. He has led the introduction of cutting-edge tools for engaged online learning, and new classroom technologies including a one-of-its-kind Learning Analytics App. These transformative technologies are expected to take student learning outcomes to a new level. Nitish has been interviewed extensively by international publications and broadcast media including the Sydney Morning Post, Bloomberg TV (Hong Kong), BBC (Singapore), ET News (India) and Zee TV (Singapore). He has also been invited as a speaker at conferences conducted by EQUIS (Bali), EduTech Asia (Singapore) and Global Minds (Sydney).

Nitish is active in several professional societies including the FICCI and the Young President’s Association. In addition, he contributes actively to social causes in India and is a Trustee of Sukhanand Ashram (Dharamshala) Trust, Seth SukhanandGurumukhrai Trust, DCW Ltd. Trust and the S P Jain Welfare Foundation. His family has founded many of these Trusts with the primary purpose of promoting education and medical welfare among low-income families. Nitish holds an MBA degree from USA’s Cornell University.